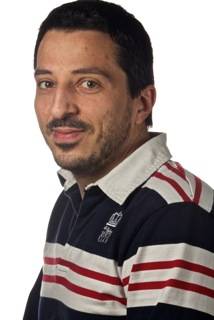 Since March 1st Mirko started his post-doc in the CaPIRe project, at the Functional Genomics research group of the Genomics and Biology of Fruit Crop Department. The title of the project is "Candidatus Phytoplasma mali -Apple: Interaction studies and Resistance mechanisms elucidation". The research activity aims to characterize, at the molecular level, the responses and modifications occurring during the interaction between the pathogen Candidatus Phytoplasma mali (‘Ca. P. mali’) and Ca. P. mali -resistant and –susceptible apple genotypes. “Ca. P. mali” is the causal agent of Apple Proliferation, the most important vector-borne disease of apple in Europe. The study will focus on genes putatively involved in the resistance response, on the investigation of the genome wide methylation patterns and the differences in the sRNAs patterns and their putatively targets in Malus genotypes upon infection with ‘Ca. P. mali’.

Mirko studied biotechnology at the University of Verona, Italy, where he got his masters degree in 2001. After his degree, Mirko started working in the SMAP project at FEM and moved in 2003 to the AlPlanta – Institute for Plant Research in Neustadt an der Weinstrasse, Germany. There he did a PhD at the Johannes Gutenberg University (JGU) in Mainz, supervised by Dr. Riccardo Velasco, Dr. Wolfgang Jarausch, Prof. Thomas Hankeln and Prof. Helmut König. Mirko studied the gene expression in “Ca. P. mali”-resistant and –susceptible apple plants establishing a method for the individuation of differentially expressed genes and the real time PCR analysis of their transcription level in invitro apple. The aim was to individuate resistance genes against “Ca. P. mali”. The work showed that there is a high complexity of interactions between phytoplasma and apple and that there is activation of a general defense response in resistant plants.

Since 2007, Mirko was involved in the EU FP6 project Silencing RNAs: organisers and coordinators of complexity in eukaryotic organisms (SIROCCO). The research activity focused on the study of the characteristics that render endogenes resistant to systemic silencing and on the characterisation of molecules (RNA, DNA and proteins) associated to the complexes involving the enzymes NtRDR6, NtDRM1, AthDRD1 and NtRDR2 which are molecular actors in RNA interference (RNAi) and in RNA-directed DNA methylation (RdDM).