The distillation, within the Edmund mach Foundation, is an integral part of the production of the derivates of the wine industry.

The processing grapes cycle is completed at the Distillery, where in 2005 it was created a modern discontinuous still pot in bain-marie, now universally recognized as a trademark of distillers in Trentino. 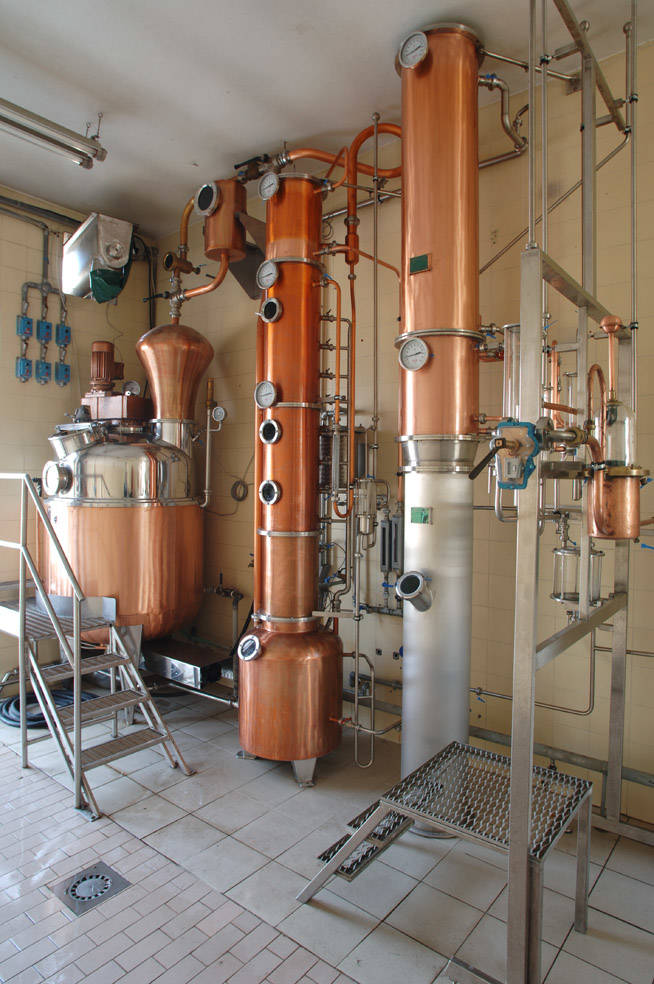 Its operation was the subject of in-depth studies as a result of which were introduced new changes, subsequently applied on other stills of similar construction design. An example is the control system and the separation of the fractions of the head of the distillation; improvements which today seem almost banal are, for example, the introduction of filters on the path of the alcoholic vapors toward the column.

Faithfully following the tradition of the Institute Agrario it continues to distill all the grapes coming by the farm, creating a significant number of single-grape brandies (grappas), with different and distinguishable features, with a really good personality. Alongside the already valuable range of grape marc distillates, in 2013 we added two new grappas (Monastery Line), born from the idea to summarize in a single grape marc distilled some of the most significant features of the territory. To complete this new product line we have been joined and improved a wine brandy aged for over 6 years in small oak barrels.

A few fruit brandies are also produced at the Distillery (apples, pears, cherries and apricots grown directly on the farm) in order to create a 360-degree distillation process. The careful and wise administration of pomace and fruit is the secret behind the elegance and personality of the grappa and the fragrance of the spirits produce at the Istituto Agrario.

The entire range of wines and grappa produced and bottled at the Istituto Agrario are on sale at the company outlet at the wine-cellar.

It can be ordered wines and spirits by mail. Contact us at: cantina@fmach.it

Visits to the Winery and the Distillery

The Winery and the Distillery are equipped for visits, even with wine and grappa tasting (up to 50 people) and with the ability to customize the route according to the needs of visitors. All visits must be booked and planned in advance. Grappa is the term reserved for grape brandies produced and distilled in Italy. The marc is the solid part of the grape, that is peel including seeds (usually withoult stalks).

This distilled is made from a fermented mono-species fruit produced in the Autonomous Province of Trento. The fruit, washed and minced, is fermented in suitable temperature-controlled containers. Once fermentation is complete the "fermented puree" is distilled in a water bath with the classic method.To get a good fruit spirit is essential that the raw material is healthy, aromatic...